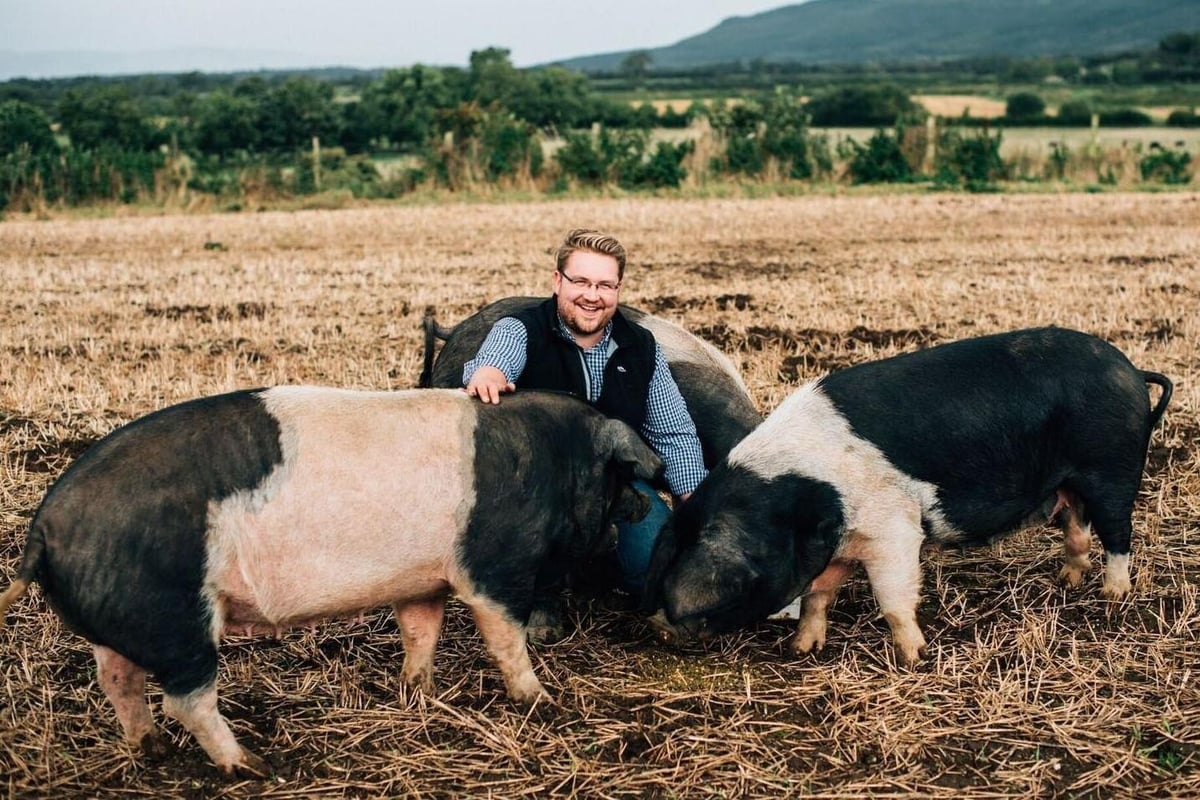 Over the next few weeks, I will be presenting these winners ahead of the grand finale in London in early September.

Alastair Crown is the owner of Corndale Farm Charcuterie in Limavady. He first bought four Saddleback pigs with the idea of ​​fattening them up for the home freezer. But he quickly fell in love with raising pigs and wanted to expand the herd. In just one year, it has gone from 4 to 30. It’s very good to have good meat, but you have to have an outlet to sell it. With his self-taught skills, he assembled boxes of meat from basic cuts and sausages, to sell to family and the local community. To add value to his meat, he self-taught the basics of butchery and started making chorizo. This Spanish-style sausage, flavored with smoked paprika, was all the rage, so it made sense to create something that was already hugely popular. He made the sausage then hung it on his fireplace to harden – not an orthodox method but certainly an effective one. Not to mention the added bonus of making visitors to the house laugh.

What started as a hobby turned into a business in 2015. Corndale Farm was born and with the help of a university food innovation center worked on the health and safety of meat preservation and invested in premises outside Limavady. He also took the plunge and quit his full-time job. Today he has a state of the art drying facility run by himself and 3 full time employees.

In any breeding, the family environment is vital. Alastair raises his pigs on land at the foot of Benevenagh Mountain. Along with the Saddlebacks, the black pig with a white stripe down the front part of their proboscis, he introduced Oxford Sandy and Blacks to the herd. This heritage breed has a sandy brown base color with black markings. They are fed barley and wheat and he also grows fodder consisting of rapeseed and turnips. The earth is also a naturally draining soil, essential for the good well-being of animals. This allows them to feed naturally and “root” for food. These pigs are really as happy as the proverbial ones. The result of this lifestyle is beautifully fat and contented pigs. Fat is essential for good meat, especially for charcuterie. The animals are at least 12 months old before being shipped, the ideal age for good meat.

Good charcuterie starts with an excellent recipe. The slow cooking and drying of meat has its roots in European cuisine. Alastair takes influence from Spain with his chorizo ​​but leans more towards Italy for his inspiration. Collaborations are also a key part of his business. He developed a veal salami for Broughgammon Farm in Ballycastle. They were keen to get a better yield and use their veal mince and that ticked the box. It produces venison salami with sika deer from the Baronscourt Estate in Tyrone and buffalo bresola, an air-dried meat, from Ballyriff Buffalo Farm on the shores of Lough Neagh. He makes a coppa, a cured shoulder of pork, flavored with Bushmills whisky. N’Duja is a spreadable salami which he also introduced. It’s all the rage now as chorizo ​​was when he started his business. Another Spanish-influenced product is his lomo, an air-dried pork loin, which he cures with Irish black butter. His chorizo ​​won 3 gold stars at the Great Taste Awards this year. You can order it and its other products online at corndalefarm.com

Chorizo ​​is a very versatile ingredient. When you chop it and cook it gently, it releases a delicious smoky oil. You can use the oil to cook potatoes and flavor rice, vegetables and pasta. Chorizo ​​goes great with seafood. A new classic dish is to serve sizzling hot chorizo ​​over chilled oysters. It also goes well with scallops, mussels, calamari, mackerel and white fish. It also goes wonderfully with chicken and white beans. This week’s recipe is a celebration of that combination. Chicken marinated in lemon, garlic and herbs is roasted and served over a stew of chorizo, tomatoes and beans.