Loans
Home›Loans›Aldi in preparation for Greenville

Aldi in preparation for Greenville


GREENVILLE – While this town may have its roots firmly in Danish culture, a new proposal could see a German-born supermarket making its way into the community.

An Aldi supermarket could be the next new business to come to Greenville if approved by the Greenville Planning Commission and Greenville City Council. The store is offered by Colburn Commercial Properties LLC of Grandville, in conjunction with the current owner, Hathaway Properties, and would be located at the corner of W. Washington Street (M-57) and Ridgewood Drive in Greenville. – Illustration of DN | Cory smith

During Thursday night’s meeting of the Greenville Planning Commission, a proposal put forward by Hathaway Properties, in conjunction with Colburn Commercial Properties LLC of Grandville, unveiled the next commercial building it would like to see built as part of the Hathaway Circle Planned Unit Development (PUD) – an Aldi supermarket.

“Tonight we are delighted to be able to present to you a preliminary proposal for an Aldi,” said Hank Venderwerp, Managing Member of Hathaway Properties. “I think John Colburn can speak to the quality of this national food store and their warm welcome in Western Michigan and across the country.”

Self-described as providing a “no-frills” grocery shopping experience with a customer-first focus, Aldi is a German family-owned supermarket with more than 2,000 stores in 36 states. The ‘no frills’ concept implies that non-essential item features have been removed to keep prices low, with Aldi often displaying a variety of discounted items and specializing in food, beverages, toilet paper, household items. sanitary ware and other inexpensive household items. elements.

Many products are Aldi’s own brands, with the number of other brands generally limited to a maximum of two for a given item. 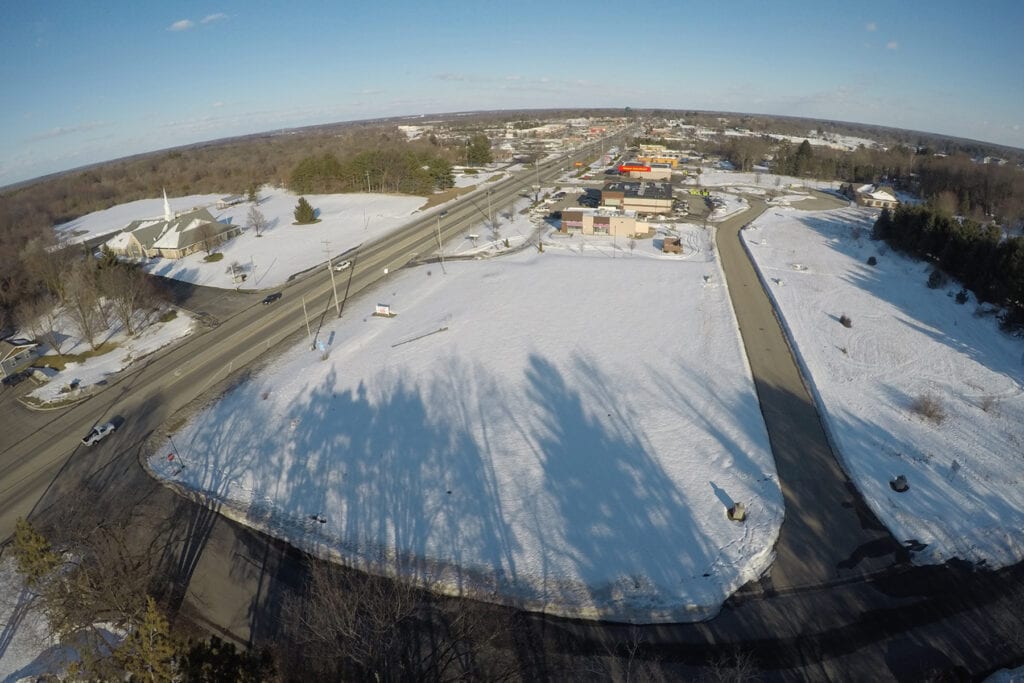 What is currently vacant land at the corner of W. Washington Street (M-57) and Ridgewood Drive in Greenville and owned by Hathaway Properties could be redeveloped into an Aldi supermarket if a proposed zoning change on the site is ultimately approved by Greenville. Greenville Planning Commission and City Council. – DN Stock Photo | Cory smith

The store is known for its unique shopping cart system, in which shoppers have to pay a quarter to “rent” a shopping cart. This quarter is returned as long as the buyer returns the basket.

According to Colburn, who has built Aldi supermarkets in other Michigan communities such as Hastings, he has been looking to bring the store to Greenville for about five years.

“Aldi is very special. They grow, but they only open when everything is going well and it took them five years to find what they really like here, ”he said. “We think this is a great site for an Aldi store and believe it will be of real benefit to the Town of Greenville. If people are unfamiliar with Aldi stores, I have a feeling that many will really enjoy this store in the community.

Colburn said the currently vacant property at the corner of W. Washington Street (M-57) and Ridgewood Drive provides sufficient space to build the store. The building’s footprint would be around 21,000 square feet, or about two-thirds the size of the old Jorgensen supermarket.

In addition to the Family Dollar and Dollar Tree discount stores, Aldi would join Daily Deals, Meijer and Walmart as local supermarkets.

However, for the proposal to come to fruition, several additional public meetings and hearings will be required. The commissioners showed general favor towards the project at that time.

“My wife and I used to shop at Aldi when we lived in Chicago years ago and it’s a department store, it’s more of a neighborhood store,” said Commissioner Larry Moss. “You can maybe compare it a bit to the daily deals, about the same scale with a lot of the same type of deals.”

During Thursday’s workshop session, town planner Tim Johnson informed commissioners that for the Aldi project to come to fruition, a major amendment to the PUD would need to be approved. 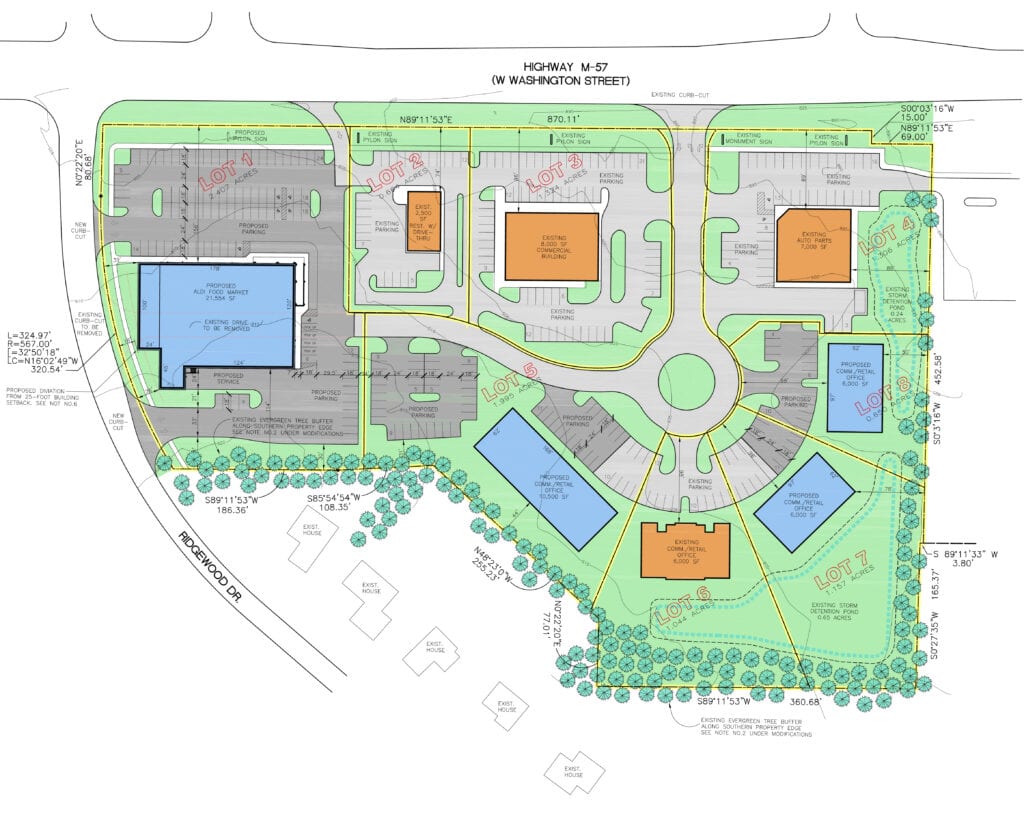 A preliminary site plan submitted by Hathaway Properties to the Greenville Planning Commission calls for the Hathaway Circle Planned Unit Development (PUD) to receive a major amendment for the construction of an Aldi supermarket. The original PUD plan was approved in 2006, but provided for the construction of several smaller commercial buildings, instead of one larger building. – Illustration submitted

Hathaway Circle’s original PUD was approved in 2006 and at the time consisted of 10 proposed buildings on five lots of over 10,547 acres on the south side of M-57.

By modifying the PUD, Hathaway Properties is requesting that the entire site be reduced from 10 buildings to eight with the total building area in the PUD remaining essentially the same due to the larger store footprint.

In addition, the Aldi would be partially constructed on what is currently the western end of Hathaway Circle Drive.

Receiving the preliminary plan on Thursday, the Commissioners voted unanimously, in the absence of Commissioner Jack Corner, to schedule a public hearing on March 25 to consider approval of the major amendment to the Hathaway Circle PUD for the preliminary sitemap – which includes Aldi’s sitemap.

According to Johnson, if this preliminary PUD plan and site plan for Aldi are ultimately approved, then an additional final PUD plan will need to be approved by the Planning Commission, which will then recommend that the final plan be approved by Greenville City Council.

In addition to concerns about the number of landscaped islands and the location of some parking spaces in relation to sidewalks, one concern echoed from one commissioner to another was the store’s potential impact on traffic on the M-57. . 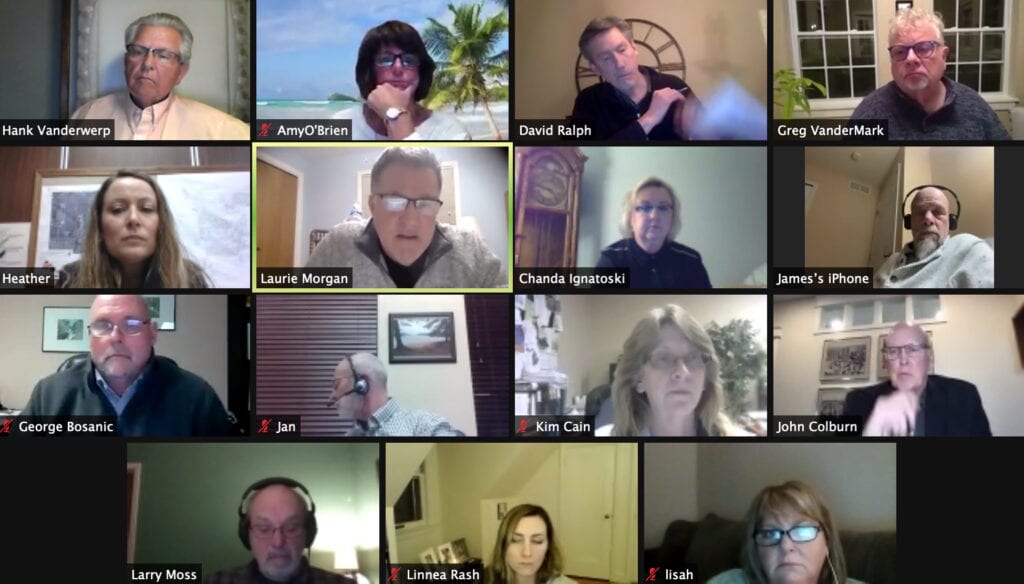 A proposal for a new Aldi supermarket, which will be located at the corner of W. Washington Street (M-57) and Ridgewood Drive in Greenville, was presented to the Greenville Planning Commission on Thursday evening in a workshop session. A public hearing on a preliminary site plan for the project is scheduled for the Planning Commission meeting on March 25. – DN Stock Photo | Cory smith

“How much traffic are we going to add to Ridgewood Drive with the Aldi?” Mousse asked. “We just had a light on Maplewood Street, but now we’re going to add traffic by trying to turn left onto M-57 again. Have we done some kind of traffic study on this or do we have any information about it? “

Commissioner Amy O’Brien said that, based on the current issues that arise when motorists attempt to turn left onto the M-57 from businesses on the south side of the M-57, she can see the Aldi supermarket make this problem worse on Ridgeview Drive.

She pointed to an example of traffic entering the M-57 at the intersection of Youngman Road, where two drive-through restaurants built in recent years – Culver’s and Popeyes – have resulted in additional traffic at that intersection.

“It’s just very, very busy and it’s extremely busy outside Culver’s,” she said. “I’m just wondering what it will do to traffic in the area to add a grocery store. My big concern is the traffic that is already there on the M-57 and the people turning left. I understand this is the jurisdiction of the MDOT (Michigan Department of Transportation), but the traffic can be horrible there. We may not be able to fix it, but it is a concern.

City Manager George Bosanic recommended that the Planning Commission request that a traffic impact study be included with the submission of the PUD and site plan, if desired.

“The upside is that there aren’t any additional curb cuts on M-57 with this project, but it will actually add traffic to Ridgewood Drive,” he said. “As far as that plays into the traffic situation on the M-57, we don’t fully know that, so for now it’s a pretty fluid thing.”

When asked if additional traffic lights at M-57 intersections were a potential answer, Bosanic said those decisions would rest with the MDOT, which has jurisdiction over all highways in the state.

“To get MDOT approval you have to fulfill certain warrants, which are essential criteria at intersections, to get a light and they are quite difficult to get,” he said. “They’re looking at traffic volumes, accidents, things like that, which are thresholds that you have to hit, as opposed to someone saying ‘my God, there are really a lot of people in here.’ There are. statistical thresholds to be respected to receive a traffic light.

Bosanic recommended Colburn provide an estimate of the type of traffic an Aldi would typically generate to the Planning Commission.

Responding to concerns, Jim Morgan, a planner at RJM Design who oversees the design of the PUD, said that by offering a grocery store rather than multiple office buildings, he believes traffic would be less congested during “peak” travel. . times of the day.

“We are replacing a few office buildings with a grocery store that distributes its users,” he said. “Office workers tend to come and go at the same time and the traffic tends to be more concentrated. With the grocery store, it is more spread out. You don’t get those peak times with 20-30 cars going at the same time.

As city engineer Doug Hinken pointed out in his note to commissioners, he believes the biggest concern for the site is the exit onto M-57.

Johnson said the Planning Commission is bound by the city’s standards for approving PUD plans to consider adjacent neighborhoods, which in this case includes the Ridgewood housing development to the south.

As many evergreen trees planted as a buffer line 15 years ago have since matured, Johnson said the natural buffer zone would be enough to have a visual impact, as shown in the original 2006 plan. However, he said that he did not believe the tree line would also serve as a noise barrier.