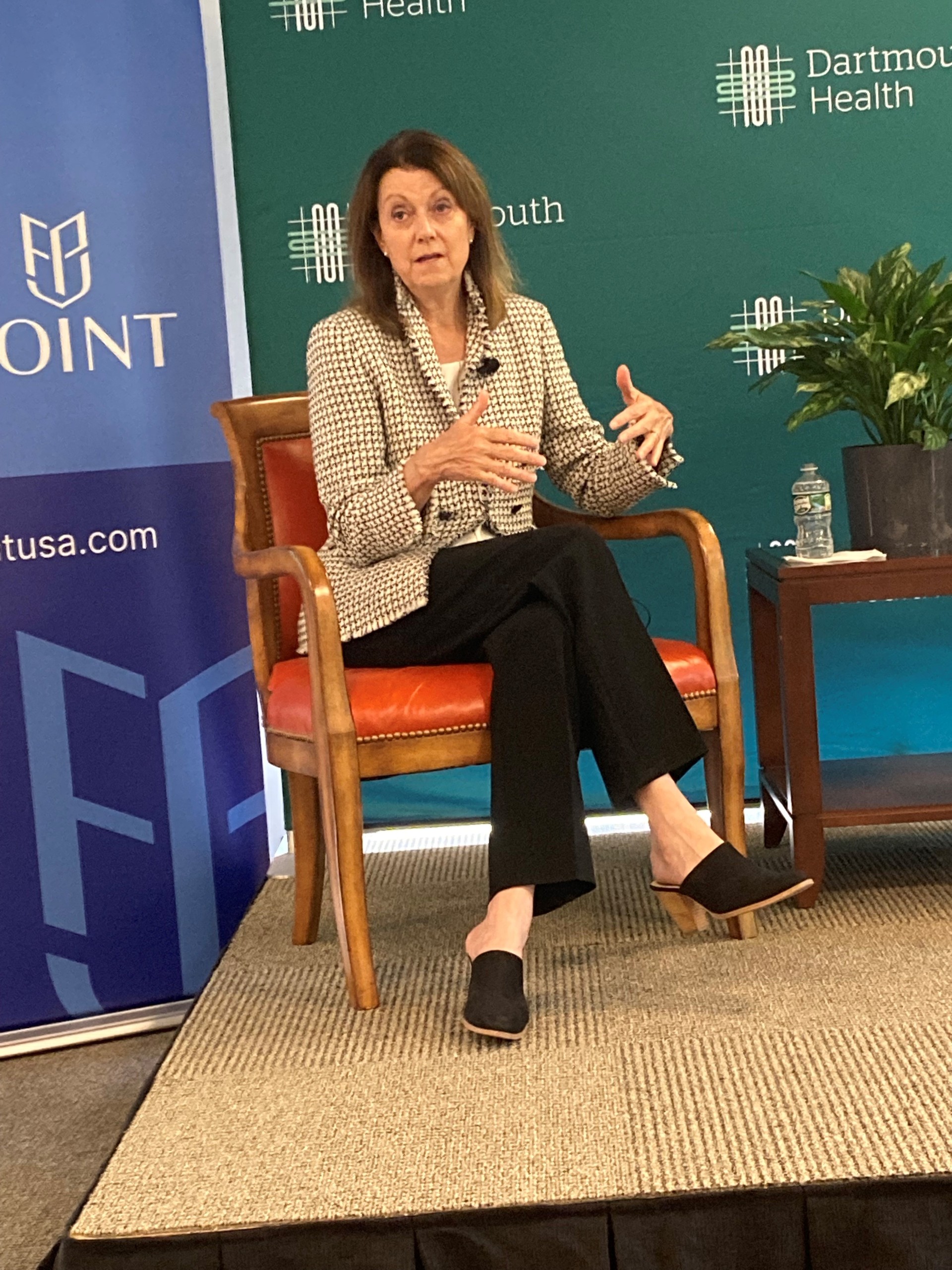 Conroy discussed his leadership style and more during a July 26 presentation with FedPoint CEO Paul Forte at the FedPoint offices at Pease International Tradeport.

According to Conroy, organizational leaders become better leaders when challenged. His included the Covid-19 pandemic.

“You learn leadership through experiences and you get a little scalded,” she said, noting that she has several leadership books in her personal library. “I have a few scars. But they actually make you a better leader when you have to deal with really tough situations.

She cited a personal past experience with her late husband when she spoke about the need for authenticity, her number one leadership principle. She was on a business trip, having a difficult phone conversation with her husband.

“I realized that I was handling it like someone in charge of conflict management across the country, and it occurred to me that it wasn’t very authentic,” she said. “It’s not healthy for an individual or a relationship, whether it’s a marital relationship or a business relationship. So you just need to be authentic with people, which sometimes means being honest in a very positive way, but just being as honest and direct as possible and respecting the individual.

Regarding her third leadership milestone – accepting personal responsibility – she noted: “We all make choices, and sometimes people blame other people where they are. And let’s be honest, we make choices that put us in the positions we are in.

According to Conroy, seeing the big picture is especially true in healthcare.

“We are here because we are committed to something bigger than ourselves,” she said. “It is not personal or financial gain that motivates us; it’s caring for others, creating a health system that works for both providers and patients; it is to engage in an overall vision. And that’s actually what keeps people going.

Summarizing her thoughts on her benchmarks, she said, “Those are the four principles that I have, and I have tried to put everything in place with that in mind in my behaviors and decisions to make sure they are the good ones. ”

Dartmouth Health, with more than 13,000 employees, is New Hampshire’s only academic health system and the state’s largest private employer. It serves patients in northern New England, providing access to more than 2,000 providers in nearly every area of ​​medicine, delivering care at its flagship hospital, Dartmouth Hitchcock Medical Center (DHMC) in Lebanon, a network of hospitals, clinics and health care facilities throughout Granite. North Country of the State and Vermont.

On the same day as the FedPoint discussion, it was announced that Dartmouth Health had been recognized by US News & World Report as the best hospital in New Hampshire in the US News Best Hospitals 2022 ranking.

Conroy, president and CEO since 2017 when he was known as Dartmouth-Hitchcock Health until this year, was invited to speak at FedPoint headquarters as part of the speaker series distinguished from the company.

Until its rebranding in 2020, FedPoint was known as LTC Partners, a wholly owned subsidiary of John Hancock Life & Health Insurance Company. The company is located on Arboretum Drive on the Newington side of the commercial port of Pease.

The company employs several dozen registered nurses who provide care coordination services to claimants and their family members, and nursing was one of the topics Conroy and Forte covered during their discussion of questions- answers. There was also time at the end of the presentation for questions from the audience.

One question was about the so-called big quit – a term applied to workers who, during the pandemic, left their jobs and left the labor market altogether or who left one profession to seek another. The question specified the nurses.

“We have had a bubbling nursing crisis for probably 10 years. We observed that we were probably not training the number of nurses we needed. Covid accelerated it,” Conroy said. “I think the nurses decided not to work in an inpatient unit; they are looking for something that gives them a little more balance.

Conroy would like to see a model for nurses that offers more flexibility in where and how many hours they work, a model similar to what she described airlines using for flight attendants. “They figured out how to match a talent pool to their needs in a very broad field,” she said. “Onboarding, the list of skills for a lot of nurses is much longer than that of flight attendants, but they still figured out how to do it in a pretty big pool of talent. We should be able to figure out how to do this.

“We should be able to train people on the basic skills that people need to have and understand how to mobilize them and actually move them from one hot spot to another,” she added.

Another central point of Conroy’s discussion was the mental health of the organization’s employees.

Forte asked about a West Coast psychologist Dartmouth Health hired during the worst of the pandemic in response to the emotional burden on staff.

“We realized that they would probably benefit from a free psychologist who is not paid by the hour. Their job was just to manage this panel of residents — approximately 400 residents — and really work to improve their mental health and well-being,” she said. “We’re talking about how to do this for the rest of our staff, because it’s been so welcomed by the residents, to just have someone to talk to. And it’s not just Covid, it’s not just taking care of Covid. It’s something they have happening in our lives outside of our jobs.

“I think every dollar we invest in trying to listen to people and help them be resilient is money well spent,” she added.

The politicization of medical care that has increased during the pandemic is not new, according to Conroy. The country experienced the same kind of polarization during the 1918 flu epidemic, often referred to as the Spanish flu.

“People were attacking each other in the streets because they were wearing masks,” she said. “I think it’s a bit of this pandemic psychology that we probably didn’t appreciate that happened in 1918. But when you read the letters that people wrote back then, it was actually very similar to the things we experienced during Covid.”

Dr. Joanne Conroy, left, CEO of Dartmouth Health, and Paul Forte, right, CEO of FedPoint, engage in a Q&A discussion during a presentation held at FedPoint’s offices at the Pease International Tradeport. (Photo by Paul Briand)

Conroy received her undergraduate degree in chemistry from Dartmouth and an MD from the Medical University of South Carolina, where she completed her residency in anesthesiology and served as chief resident.

Before coming to work in New Hampshire, she was CEO of Lahey Hospital and Medical Center, in Burlington, Mass. Prior to Lahey, Conroy served for several years as Director of Health Care for the Association of American Medical Colleges in Washington, DC.

Conroy is expected to become president of the American Hospital Association in 2024.

As for the future of health care itself, Conroy believes that techniques such as telehealth are not only here to stay, but are a way to reduce health care costs.

“We weren’t really doing telehealth before Covid, then all of a sudden we realized we could,” she said. Meeting with a telehealth professional remotely is especially helpful for people with mental health issues, according to Conroy.

“It works for the patient. Our no-show rate is almost zero,” she said, adding that it removes what she called “the stigma” sometimes associated with walking into an office.

“A lot of adults are really happy to do their telehealth visit from the comfort of their own home or private space rather than going to a psychiatrist or psychologist’s office,” she said. declared. “I would say we have a lot of our elderly patients who love telehealth. In fact, I haven’t seen my primary care in about three years, and you realize how much you can really accomplish during a telehealth visit.

The cost-benefit of a telehealth visit, Conroy said, is fewer lab tests.

Health care facilities cannot think of themselves as working in isolation, according to Conroy.

“We have this mantra that no one has to worry alone,” she said. The same mantra applied during the pandemic as some Granite State hospital CEOs struggled to find beds for the growing number of Covid patients.

Using the New Hampshire Hospital Association as a coordinated means of communication, Conroy said, “We were meeting every day to talk about patient beds and critical care beds and ventilators. And we had this mantra: No CEO worries alone in New Hampshire. »

For example, when the Elliot Hospital in Manchester had an overflow of Covid patients in its emergency department, Dartmouth Health stepped in to help find beds, according to Conroy.

“It’s been a big help for them to regain their balance and continue caring for patients in this community,” she said. “I think that’s the role of health systems: to work together in our region.”