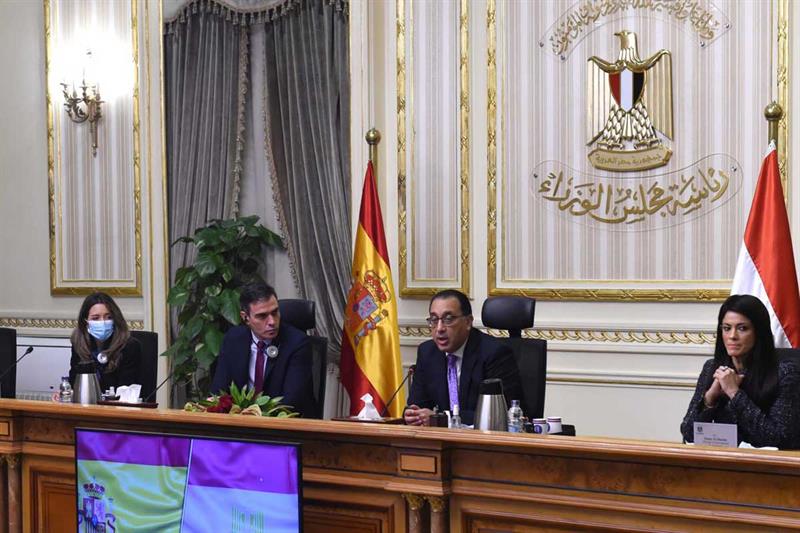 The meeting was held on the sidelines of the Spanish-Egyptian Business Forum, which was co-inaugurated in Cairo on the same day.

Spanish Prime Minister Sanchez said that Spain is seeking to strengthen the competitiveness of its business sector in the areas of water treatment, renewable energy, agriculture and rail transport in a way which helps to strengthen bilateral relations with Egypt.

He expressed his confidence in the abilities of Spanish companies to contribute significantly to the ongoing development process in Egypt, the statement said.

In response, Madbouly hailed the partnerships between Egyptian and Spanish companies, saying they represent a successful model, and affirmed his aspiration to foster cooperation with the European country.

Since 1998, Siemens Gamesa has executed 80% of wind farm projects in Egypt, according to the statement.

Additionally, CAF is currently managing a number of projects for Egypt’s National Railway Authority and is seeking additional contracts to extend the country’s metro lines.

Additionally, Madbouly announced that Talgo will provide Egypt with six new trains, thanking the company for its decision to import an additional train as a gift.

Sanchez arrived in Egypt on Tuesday evening accompanied by a high-level delegation on an official visit to participate in the co-inauguration of the Spanish-Egyptian Business Forum in Cairo.

Earlier on Wednesday, the Egyptian and Spanish sides signed a number of bilateral cooperation documents, including a joint declaration for the activation of the Egyptian-Spanish Business Council.

The declaration, according to the Egyptian government, should strengthen the presence of Spanish companies in Egypt and develop their activities in the coming period.

The two parties also signed a joint declaration on financial cooperation, on which the Spanish government will guarantee 400 million euros to finance the projects that Spanish companies will implement in Egypt.

They also signed two memorandums of understanding to improve cooperation between the two countries in the fields of cultural discourse and sports.

This is the first visit by a Spanish prime minister to Egypt since 2010.

Trade between Egypt and Spain totaled 1.96 billion euros in the first nine months of 2021, registering an increase of 23.8% compared to the same period last year. Egyptian Industry Minister Nevine Gamea said on Wednesday.