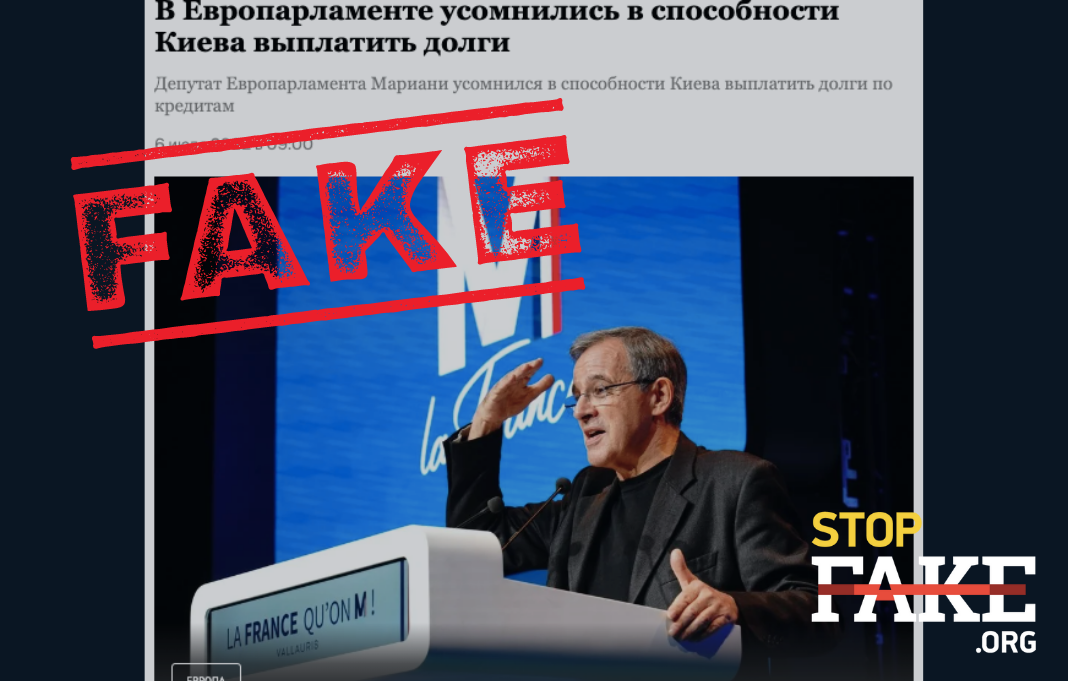 False: the European Parliament doubts that Kyiv can repay its debts

Far-right French MEP Thierry Mariani, known for his pro-Kremlin views and his visit to Russian-occupied Crimea, said he doubted Ukraine would be able to repay its debt. His opinions are his own and do not reflect the position of the European Parliament and the European Union. The EU continues to provide aid to Ukraine, through grants that do not need to be repaid and loans granted on very favorable terms.

The pro-Kremlin media have once again resorted to a tried and tested disinformation tactic, taking the opinion of a fringe politician and passing it off as that of the European Parliament, this time casting doubt on the ability of the Ukraine to repay its debts.

France is afraid that Ukraine will not settle its debts with the West, the URA.ru news agency said. European Parliament doubts Ukraine can repay foreign loans, RT in Russian headlines.

This is not the first time that French MEP Thierry Mariani has become a source of disinformation which was then actively disseminated by Russian media. StopFake debunked fake stories stemming from Thierry, such as the claim that the French parliament was lifting sanctions against the Russian Federation. Again, Thierry was the initiator of this resolution, which came to nothing. Mariani visited Russian-occupied and annexed Crimea, a visit that Russian media presented as an official EU visit, when in fact it was a private visit by pro-Russian individuals closely linked to the Kremlin.

Not only do Mariani’s statements not correspond to reality, but they also do not correspond to the official position of the European Parliament. Since the start of the Russian aggression against Ukraine, the EU has raised around €4.1 billion for Ukraine’s overall economic, social and financial resilience in the form of emergency macro-financial assistance , budget support, emergency aid, crisis response and humanitarian aid.

In addition, from March to May 2022, Ukraine received €1.2 billion in macro-financial assistance. Financial aid amounting to €120 million has been allocated to support state governance.

Also in May, the European Commission offered to provide Ukraine with additional macro-financial assistance in the form of loans of up to €9 billion. According to Bloomberg, “the new macro-financial assistance program for Kyiv will consist of 25-year loans with a 10-year grace period to repay the principal,” three EU officials said, adding that interest payments will be covered by the EU budget. ”

As explained in a press release from the European Commission: “According to the proposal, MFA funds will be made available to Ukraine in the form of long-term loans on favorable terms. The assistance will support Ukraine’s macroeconomic stability and overall resilience in the context of Russian military aggression and related economic challenges. In another expression of solidarity, the EU budget will cover the interest costs of this loan. As with all previous MFA loans, the Commission will borrow funds on international capital markets and transfer the proceeds on the same terms to Ukraine. This loan to Ukraine will be guaranteed for 70% of the value by amounts set aside by the EU budget. »

The European Union has also started working on the legal justification for the possible use of frozen Russian assets for the reconstruction of Ukraine.

In May this year, the US Congress also passed a bill calling for “immediate bilateral, multilateral, and commercial debt service relief for Ukraine.” The idea of ​​temporarily suspending payments on Ukraine’s international debts is being actively promoted. Since Russia invaded Ukraine in February, Ukraine’s economy has taken a huge hit and shrunk by more than 40%. In a recent interview with Spanish newspaper El Pais, Ukrainian Finance Minister Serhiy Marchenko estimated Ukraine’s war losses at $103.9 billion and a reduction in its GDP due to the destruction infrastructure and loss of business revenue.