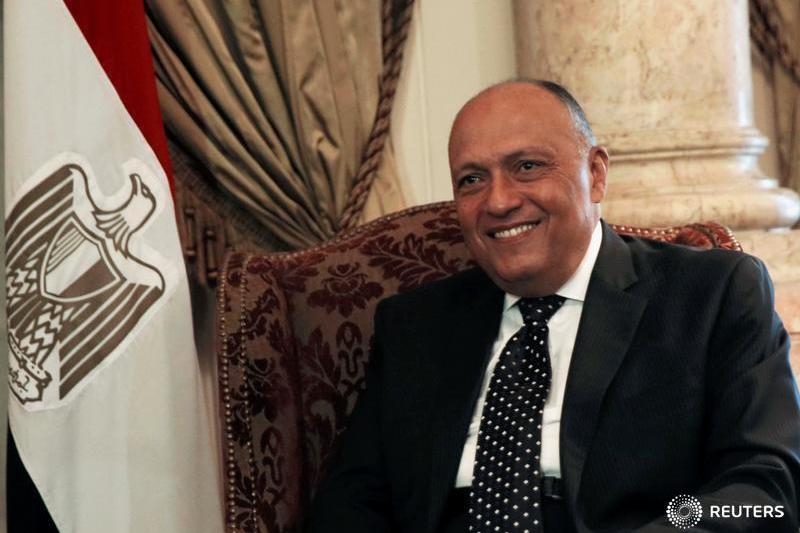 At the end of his visit to Madrid, Foreign Minister Sameh Shoukry met on Tuesday with representatives of the Spanish side of the Joint Egyptian-Spanish Business Council of the Spanish Chamber of Commerce.

During the meeting, Shoukry presented the reforms and economic achievements of the Egyptian government, which have created an attractive climate for foreign investment in Egypt.

The meeting also focused on the importance of developing economic relations between Egypt and Spain, reflecting the potential of both countries and calling on Spanish companies to inject more investment into Egypt.

In addition, Shoukry highlighted the need to strengthen the role of Spanish businesses in supporting the green transition in Egypt, particularly in light of Egypt’s hosting and chairmanship of the 27th session of the Conference of Parties to the United Nations Framework Convention on Climate Change (COP 27) in Sharm el-Sheikh in November.

Late Monday, the FM spoke with his Spanish counterpart Jose Manuel Albares as part of his visit to the Spanish capital Madrid to advance bilateral relations between Egypt and Spain.

Ahmed Hafez – spokesman for the Ministry of Foreign Affairs – said the talks included an in-depth discussion of all bilateral cooperation between Egypt and Spain, where the two ministers welcomed the increasing pace of cooperation and the importance of building on the results of visits and mutual exchanges. contacts at all levels to achieve the interests of both countries.

Shoukry also underlined his aspiration to strengthen the partnership with Spain and improve economic relations through several axes, including increasing trade – especially through increasing Egyptian exports – and increasing Spanish direct investment. to take advantage of promising opportunities in many sectors, including infrastructure, transport. , water, renewable energies and electric mobility in the light of Egypt’s major development projects.

In addition, the two sides discussed cooperation within the framework of the Union for the Mediterranean and Spain’s support for strengthening the partnership between Egypt and the EU), especially in light of the current dynamics of this partnership.

In addition, the talks included an exchange of views on international and regional issues of common concern, including the crisis in Ukraine and its repercussions and the current deterioration of the situation in the Palestinian Territories.

He then presented the constants of the Egyptian position on the issue of the Grand Ethiopian Renaissance Dam (GERD).

The two senior diplomats also signed a memorandum of understanding for cooperation in the field of diplomatic studies and the exchange of experiences between the Institute of Diplomatic Studies of the Egyptian Ministry of Foreign Affairs and the Diplomatic School of the Kingdom of Egypt. Spain to strengthen cooperation. in exchange and training programs.