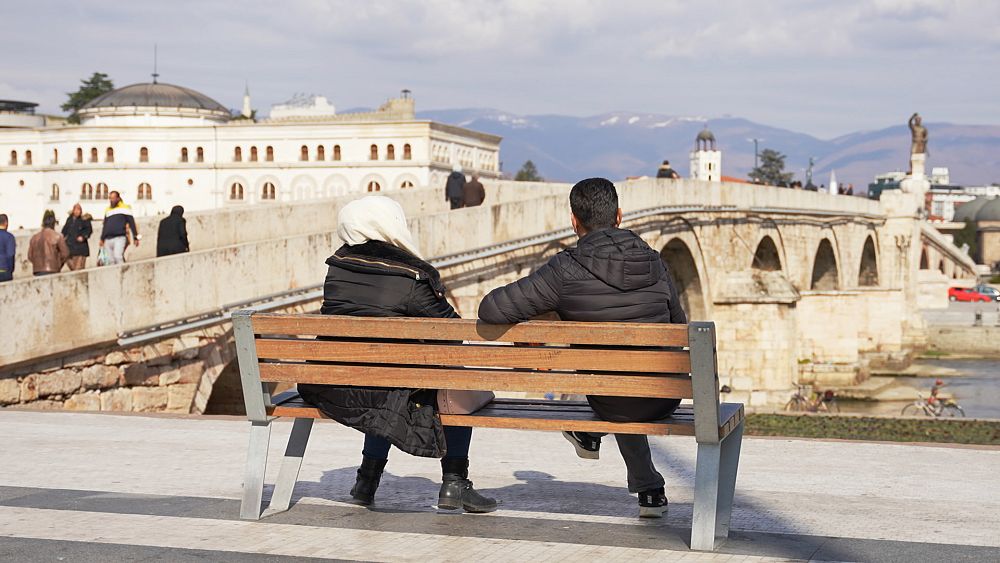 Over the past 30 years, 77 MFA operations worth €16 billion have helped 27 countries. The most recent example is the 1.2 billion euros brought to Ukraine in solidarity with the Ukrainian people.

Macro-financial assistance (MFA) mainly takes the form of loans on very favorable terms and at low interest rates. To get the money, countries must have signed a financing program with the IMF, met conditions to respect human rights and fight corruption, and implemented democratic, economic and governance reforms.

The broader objective is to help ensure stability and prosperity beyond the EU.

The layoff of a large number of workers led to a sort of scissor effect: on the one hand, tax revenues were sluggish, and on the other hand, they led to a sharp increase in public spending.

In addition, foreign direct investment has dried up, reducing the country’s trade balance.

The impact on young people

Since 2005, the youth unemployment rate in North Macedonia has been steadily falling, but in 2020 it has skyrocketed.

Marija Sepetovska, 23, found a job thanks to the EU Youth Guaranteeset up by the national agency for job seekers.

“Of course, it was a stressful time to start your career in the pandemic and especially for young people. I’m actually becoming more and more confident, especially seeing that there are a lot of programs that support our country.”

Marija admits that some of her friends weren’t so lucky.

“It was very easy for me, but unfortunately that’s not the situation of many other young Macedonians. Some of them find it much harder to find the great opportunity. So it’s still not the best here,” she adds. .

The first tranche of macro-financial assistance was sent in the form of emergency aid. For the second payment, North Macedonia had to fulfill a list of conditions. This included the creation of a youth unemployment unit.

Explaining what the unit does, its head Goran Petkovski told Real Economy: “They are involved, first in developing active labor market measures within the framework of the operational plan and how we can better target young people with these active market measures that we have. They are also responsible for coordinating the employment of youth counselors within the local employment office and, of course, monitoring and reporting on the Youth Guarantee.”

The 160 million euros in emergency loans helped North Macedonia through tough economic times, but Shenaj Hadzimustafa, associate professor of business and economics at South East European University, believes the benefits will last for a long time.

“The money was needed for this period in order to finance part of the budgetary and balance of payments needs. But on the other hand, the reforms are the ones that remain and will have a positive impact on the country. So these reforms, I think it should have an impact not only in the short term but also in the medium and long term.”

“What difference has EU macro-financial assistance made to the country?”

“The macro-financial assistance from the EU has helped us a lot, not only from the point of view of pure financial assistance, but also It has helped to continue the reforms that we have started in the area of ​​public finance management and in other areas. But it also gave a clear signal to other international and financial institutions and donors with whom we cooperate, that we have a stable economic policy in times of crisis.”

“How difficult were these reforms to implement?

“The fight against crime and corruption has produced results because we have improved our position on the reports of Transparency International. We have now entered a country that has democratic conditions because in the past, in the past, there there were flaws in the democratic and procedural system in the country, and we are very, very happy because of that.

“How do you ensure that the reforms do not stop there, but that they will be fully implemented in the future?”

“Now North Macedonia is a candidate for EU membership. The next step is the accession talks. Do you have any hope that they will start soon?”

“North Macedonia has a clear strategic goal to become a full member of the Euro-Atlantic Associations. Last year we celebrated the 30th anniversary of our independence, and this was accompanied by becoming the 30th member of the “NATO. We are already in the 17th year and still have not started negotiations. Unfortunately, last year there was another challenge which was imposed by the former Bulgarian government. With the two new governments we started a new dialogue, so with the Bulgarian Prime Minister we already had a meeting in Skopje in order to restore confidence.

2022-03-10
Previous Post: Russia may soon be unable to pay its debts
Next Post: Sovereign funds invested 2.8 billion euros in 12 Spanish companies in 2021