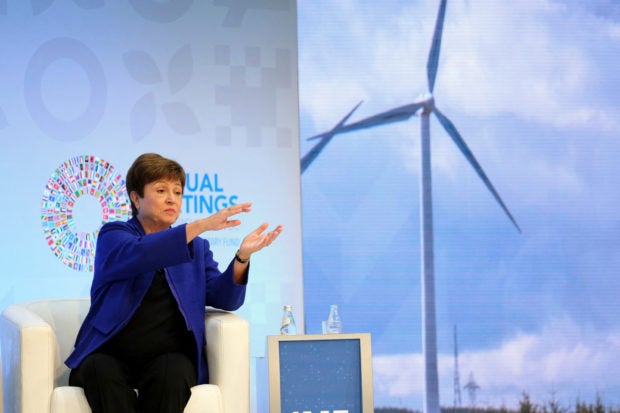 IMF Managing Director Kristalina Georgieva participates in a panel discussion during the group’s annual meetings at the headquarters of the International Monetary Fund in Washington, U.S., October 12, 2022. REUTERS/James Lawler Duggan

Georgieva said she had informed the IMF’s Executive Board that the fund’s first-ever facility to provide long-term financing to help members address structural challenges was ready to begin lending to low-income countries. and to most middle-income countries, after receiving initial pledges of $37. billion.

She said members could start applying for the funds, which will offer 20-year maturities and a 10.5-year grace period, and that the board would consider applications in the coming months.

“I am delighted to announce that the new Resilience and Sustainability Trust (RST) has become operational,” she said in a statement.

The fund, proposed by Georgieva last June, won the backing of the Group of 20 major economies last October and was approved by the IMF’s board in April.

It allows wealthier members of the IMF to channel their special drawing rights, or emergency reserves, to help vulnerable countries on targeted issues.

Georgieva said she was pleased that the fund delivered on its promise to make the RST operational around the 2022 IMF and World Bank Annual Meetings.

Australia, Canada, China, Germany, Japan and Spain provided the first round of contributions amounting to around $20 billion, just over half of the total RST pledges of $37 billion from 13 countries.

Further contributions would come into effect in early 2023 once countries complete their national procedures, she said.

Other countries should pledge resources over time, Georgieva said, adding that the IMF would continue to expand the pool of contributors and ensure that the RST has sufficient resources.

She cited countries’ strong interest in tapping into RST funds, and said the IMF was in “advanced discussions” on their actions on climate policy, while laying the groundwork for RST loans to support pandemic preparedness. .