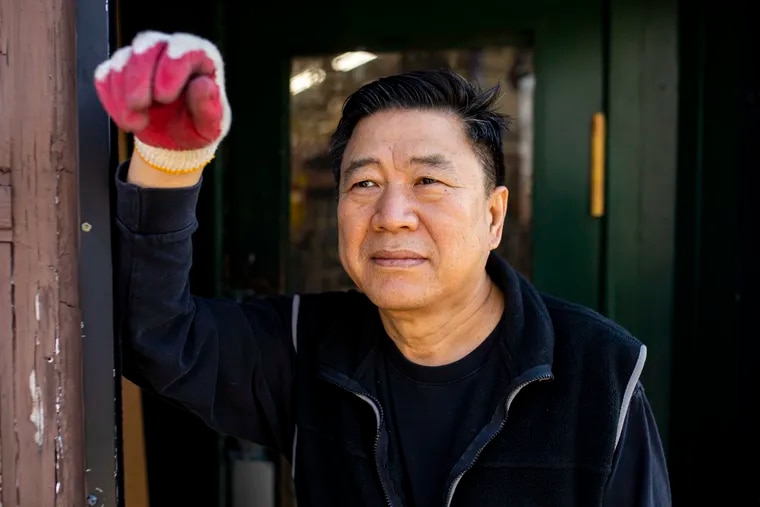 In Philadelphia’s AAPI communities, the path to PPP loans depended on community support

Seven years ago, Justin Lee, a Korean immigrant, took over Fern Rock Hardware, an old-school store in Olney that had been operated by a Jewish family for 86 years.

He says it’s the kind of place where Lowe’s and Home Depot employees tell owners of older homes in the neighborhood to pick up replacement parts that have long been out of production. Lee and his wife are his only employees.

When the federal government launched the Paycheck Protection Program, the massive effort to support businesses during the height of the coronavirus pandemic, Lee started hearing about people receiving financial assistance.

Lee said he heard about PPP from friends in the neighborhood, on KakaoTalk – a popular Korean chat app – and from community groups. He successfully applied with the help of a local business organization and a Korean bank in Elkins Park.

Metro and The Inquirer have been speaking with Asian American small business owners, community leaders, hallway managers and others around Philadelphia for more than a year. They said language and technology barriers hamper access to PPP loans.

However, Lee’s experience highlights the resilience of the city’s AAPI business communities despite these obstacles, and indicates where more resources could be devoted to ensure others are not left behind.

Fern Rock Hardware was far from the only AAPI-owned company able to raise federal dollars through a sometimes informal network of community organizations, friends, accountants, young parents and institutions. financial.

In most cases, the path to a PPP loan, especially for business owners with limited English proficiency, involved significant help from multiple sources.

Their stories show the importance of community and neighborhood groups, many of which struggle to find funding and staff, and the need for greater government outreach at all levels.

“They really held our hand and sent out all the information that might apply to every small business owner in the hallway,” said Elisa Kim, director of T-House.

She said the $65,000 the company received over the two rounds of PPP “really made a difference in whether we kept the lights on or not.”

“It was so hard. I have never filled out so many forms in my life.

Kim grew up playing on the front porch of the T-House building on Fifth Street near Ashdale Street. His parents founded the company 35 years ago, making custom shirts and other items for schools, churches and other institutions.

Although her parents still own the company, Kim took charge of navigating the PPP process.

“It was so hard,” she said. “I have never filled out so many forms in my life.”

The organization, like most Philadelphia trade corridor groups, has limited resources — its four-person team serves the more than 300 businesses in the stretch.

“We have a fairly diverse team where we’ve been able to translate for most of our businesses, but we don’t have all of Olney’s language needs on our team,” said Stephanie Michel, the organization’s executive director.

Dan Tang, who runs a pharmacy down the hall, occasionally volunteers his time to provide Korean interpretation or help his neighbors with paperwork.

“We’re a pretty small staff for a big city with lots of businesses, so we rely heavily on our partnerships,” said James Onofrio, program manager at the Philadelphia Department of Commerce.

Through a local grant program called Restore and Reopen — which provided nearly $1.6 million to 186 businesses damaged by civil unrest after the police killing of George Floyd — the city has paid community organizations that have offered translation assistance to small businesses.

“I think this was by far our most diverse response in terms of ethnicity and immigration status for our grants,” Onofrio added.

Metro, The Inquirer and Resolve Philly collaborated on a data analysis examining which banks provided business loans in communities with high AAPI populations.

In Chinatown, Asian Bank processed more than $2.4 million in loans and distributed them to 68 businesses, representing about 18% of all loans in the neighborhood and the most of any lender.

Of Chinatown’s top 10 PPP lenders, only four were major banks. In South Philadelphia, where there is a concentration of Cambodian, Vietnamese and other AAPI-owned businesses, three of the top 10 were large financial institutions. Olney’s major lenders included only two national banks.

National banks did not provide the most loans or the largest median loan in any of the three neighborhoods analyzed.

Fintech companies, such as Paypal and Kabbage, appear to have played an important role in channeling funds to minority communities.

A report that analyzed a national sample of restaurants found that establishments owned by Asian Americans were about 8.5% more likely to go through fintech for PPP than white businesses.

“Fintech was really important to get these funds distributed to minority communities,” said Robert Fairlie, an economics professor at the University of California, Santa Cruz, who has studied PPPs. “There is no doubt about it.”

Kim thought her PPP application had hit a wall when she felt ignored by a national bank T-House had worked with for decades. She eventually turned to PayPal to process loans for the business.

Asian Bank, which is based in Chinatown and has a branch in Oxford Circle, has encountered new customers who have struggled with online portals set up by large financial institutions, said James Wang, chairman and chief bank management.

Others, he added, struggled to get answers about their candidacy.

PPP forms were not initially available in Simplified Chinese. Asian Bank therefore created a summary of the program in Chinese and developed a spreadsheet guide that business owners could use to get an estimate of the loan amount.

Wang even held a seminar on WeChat, a popular app in the Chinese community, to explain the benefits of PPP.

“It was much more of an hands-on experience than I think some of the other places were able and willing to provide,” he said.

For future business assistance programs, it would be better to have Simplified Chinese documents from the start, “so that we don’t have to play translators,” Wang added.

“What would be really helpful is for the information to be released in a timely manner,” he said through an interpreter.

“What would be really helpful is for the information to be released in a timely manner.”

“My parents, the first line when someone walks in and asks – they’re from the city of Philadelphia – to speak to the owner, their first response is ‘no English’ or ‘no owner,'” Nam said. “I’m able to break that barrier right away, just by walking in with a smile.”

Lee highlighted the support system that he and many other AAPI business owners relied on and said additional funds should be allocated to strengthening this network of organizations, a group that he says has helped him. financially and mentally.

“Knowing that I could go to these local organizations and receive help that way, it kind of relieved me and kind of eased the burden of going through these processes on my own,” Lee said.

Julie Christie and Diana Lu contributed to this report.

This story was a collaboration of The Inquirer, Metro Philadelphia and Resolve Philly and made possible through the Future of Work program. The story grew out of the work of the community engagement team at Resolve Philly.