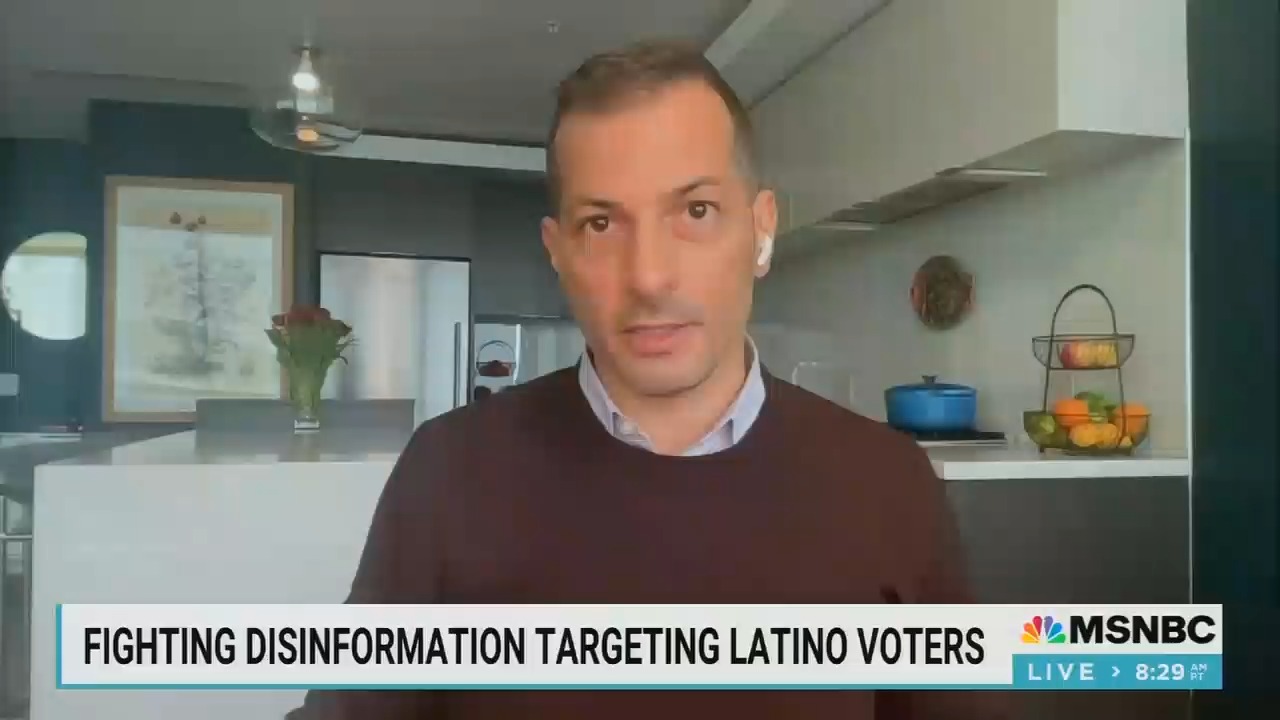 On MSNBC’s Cross Connection, Angelo Carusone calls on social media companies to apply their rules equally in English and Spanish

JUANITA MONSALVE (UNITED WE DREAM): So for us it was really important to take a look at the kind of anti-immigrant narrative, how is it being used against our communities and what are they consuming right now? Part of what we discovered is that young Latin women, ages 18 to 35, consume a wide variety of information and are interested in immigrant stories. Whereas, for young Latinx men, again 18-35, we found that they’re much more insular, they’re in a virtual world, and they don’t consume much media on the immigration or immigrants. And the reason it matters is because it presents a huge void that could very easily be weaponized and exploited by bad actors. So we need to get out and engage with them now if we want to see them engage with us in the 2022 election and much more in the 2024 election. Right now they are being left behind when it is to ensure that they participate in the vote.

TIFFANY CROSS (HOST): Well, you brought up Latino men, and I want to get your thoughts on this Angelo, because as she talked about, Latino men over 36, they’re the primary audience for these groups on YouTube, news clusters. They also encounter a lot of misinformation, polarizing anti-immigrant stories. I’m curious how can trusted news outlets, or trusted news outlets, find this specific demographic?

ANGELO CARUSONE (PRESIDENT OF MEDIA MATTERS): It’s going to be a real challenge because everyone’s late, and I think that’s one of the big wake-up calls that was reflected in this story and the observation you just made. I always try to look for the easiest things to do first that won’t solve the whole problem, but will start making significant gains. One thing that’s really clear is that there’s an absolute gap in how social media companies, especially YouTube and Facebook, enforce their existing misinformation rules. So, yes, there’s a lot to do, that’s more, but one thing that’s clear, that can be done, is that they can apply the same standards with respect to things that are already contrary to rules.

So if you remove very, very explicit anti-immigration, anti-hate, and election information in English, but leave the exact same material in place and proliferate widely in Spanish, that’s going to be a real problem, and it’s going to produced every day on the platforms. And that’s partly because they haven’t made the investments, so that’s one thing. The second element is that, and I think this relates more specifically to news agencies, they are going to have to meet people where they are. And one of the big takeaways, and not just from the analysis done by United We Dream, but from all the research that’s been published over the last two years, is that it’s more peer to peer. These are closed groups. Young Latinos in particular use WhatsApp almost two and a half times more than all other population demographics. So if we don’t think about researching and reporting and thinking about it as part of the information landscape, we will never be able to capture the narrative and then the answers.