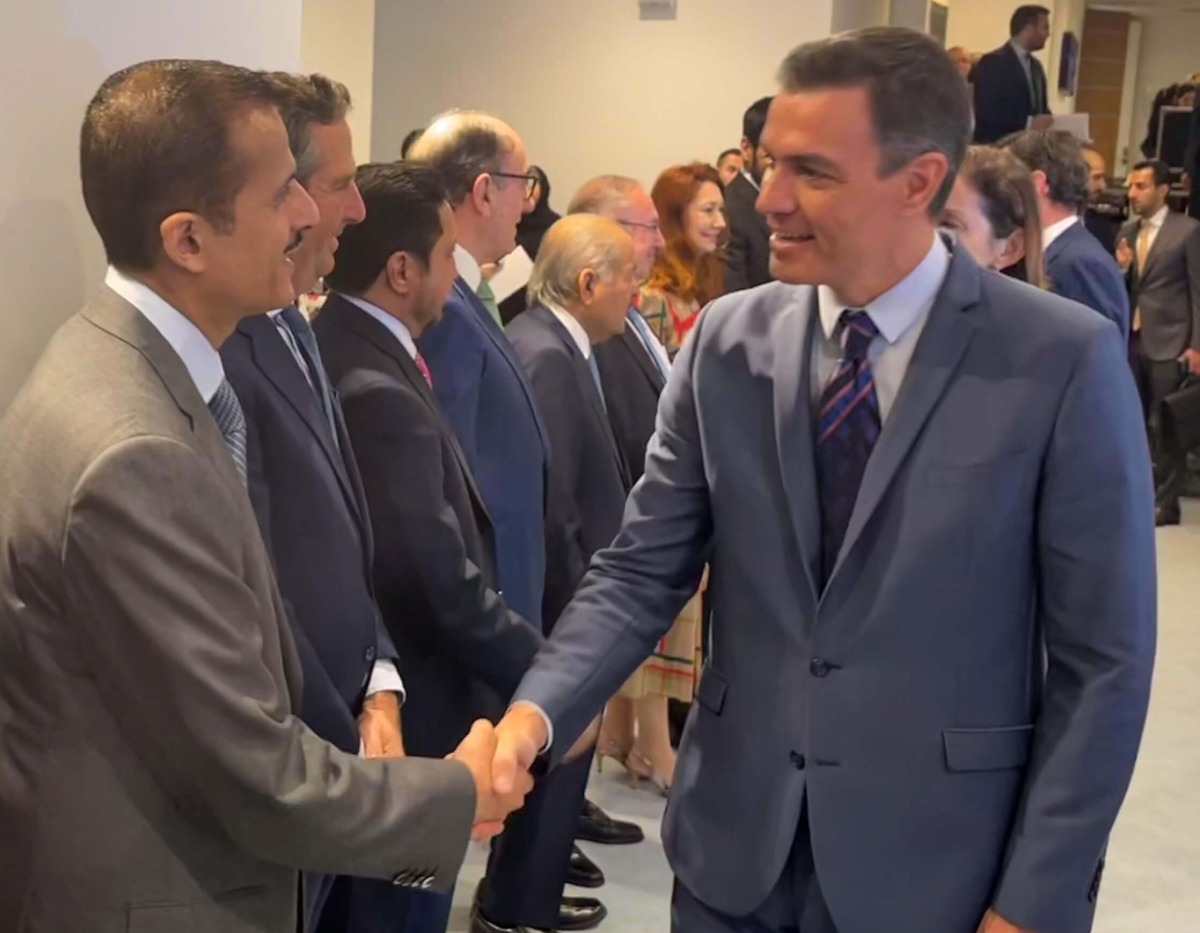 Doha: The Qatari Business Association (QBA) participated in the Qatari-Spanish Business Forum, on the sidelines of the official visit of Amir HH Sheikh Tamim bin Hamad Al Thani, to Madrid.

The meeting was attended by Spanish Prime Minister HE Pedro Sanchez; Minister of Trade and Industry HE Sheikh Mohammed bin Hamad bin Qassim Al Abdullah Al Thani; HE Reyes Maroto, Minister of Trade, Industry and Tourism of Spain, and several high-level government entities in both countries.

Prime Minister Pedro Sanchez revealed during the opening of the Qatari-Spanish Business Forum that the visit of H.A. Amir Sheikh Tamim bin Hamad Al Thani to Spain, was a historic visit which resulted in the announcement of major investments ahead, in addition to achieving a significant increase in trade volume in the next stage. Expressing his joy for the role played by the Joint Business Council in this regard, President Sanchez stressed that Qatari investments in the Kingdom are important for the Spanish economy, as several agreements have been signed, including an agreement with Qatar Investment Authority. and its Spanish counterpart. , highlighting at the same time the great role played by Spanish companies in Qatar in several areas, including stadium construction, infrastructure, energy and the environment in response to Qatar Vision 2030.

The Spanish Prime Minister also indicated that Qatar is open to the world and that Spain can participate in this opening in the next stage by strengthening partnerships.

Sheikh Faisal bin Qassim Al Thani, president of the Qatar Businessmen’s Association, said the return of face-to-face meetings after two years of the coronavirus pandemic is very important, and the Qatar Businessmen’s Association Qatar is proud of our country’s response to this global crisis. pandemic and preserve the health of citizens and residents, including by bringing medical vaccines from Spain.

Sheikh Faisal added that despite the COVID-19 pandemic, the Qatar Businessmen’s Association has worked over the past period with the Spanish side to strengthen the economic partnership between the two countries, and that she had several meetings with Spanish officials, the most important of which was with the Minister of Foreign Affairs, and resulted in the creation of the Joint Business Council. The council encouraged the private sector to invest in media, sports, healthcare, services and technology.

A number of Spanish companies have also been drawn to Qatar to work in a number of sectors of interest for Qatar National Vision 2030, adding the association’s determination to continue fruitful cooperation and support the efforts of both countries. .

Sheikh Faisal said that Qatar is fully ready to host the World Cup from now on, and is working hard to make the next edition of the World Cup an ideal one, especially since it is the first of its kind in the Arab world and the Middle East. Est, welcoming Spanish fans and the business community to cheer on the Spanish team and witness this unique event which will be the start of other global events hosted by Doha in the future.

Sheikh Dr. Khaled bin Thani Al Thani, Chairman of the Qatari-Spanish Joint Business Council, in a speech delivered on behalf of the members of the Qatari Businessmen’s Association, expressed his sincere thanks and gratitude to the governments of the two countries for organizing this economic event to learn about the trade and investment successes that have been achieved between Doha and Madrid and the partnership prospects that include all economic sectors.

The Minister of Trade and Industry witnessed the signing of a memorandum of understanding between the Qatar Businessmen Association and the Iberdrola company. On the Qatari side, it was signed by Sheikh Khalid bin Thani Al Thani bin Abdullah Al Thani, second vice-president of QBA. On the Spanish side, the MoU was signed by Ignacio Galan, CEO of Iberdrola Company.

Sheikh Dr. Khalid bin Thani, Vice President of the Qatar Businessmen’s Association, pointed out that the relationship between the State of Qatar and Spain has been well established for a long time, as there is close cooperation between both parties, particularly in terms of investment and economic cooperation, expressing pride in these multidimensional bilateral relations, especially since Qatar is one of the largest investors in Spain

Sheikh Khaled said: “We know the Spanish market, because Spain is the third destination for foreign investment in Europe and the second in the world in tourism, following the major reforms undertaken by the Spanish government. Wage costs in companies are 29% lower than in the euro zone, as are labor and electricity costs. In addition, most factories are run by the private sector, which facilitates partnerships, and the opening of Spain to Latin America gives an additional boost to investments.

Sheikh Khaled said Qatar has diversified its investments in Spain in response to Qatar’s 2030 vision, which encourages investment in sports, tourism, clean energy, ports, real estate, media, healthcare healthcare, technology, stock market, retail, banking and aviation. and other vital sectors that bring economic benefits to both countries. He noted that the official visits between the officials of the two countries during the recent period confirm the will of the two governments to develop these bilateral relations and upgrade them to become exemplary, and therefore there is an opportunity to do a lot. in this partnership and to strengthen it, as part of the economic recovery plan in Spain and move towards an innovative and sustainable digital economy, where Qatari investments can play a role.

Sheikh Khaled indicated that his country, thanks to hard work, was able to achieve a great renaissance on all legislative and logistical fronts and in infrastructure, and is ready to receive Spanish investors due to the great investment incentives that it offers to the foreign investor and due to its geographical proximity to the major markets of the region.

Sheikh Khalid indicated that the formation of the Qatari-Spanish Joint Business Council includes an elite group of investors, large companies and serious businessmen, and its objective is to improve the role of the private sector in the diversification of intra-regional investments in important economic areas for both countries, in addition to expanding economic, technical and scientific cooperation, exchanging information and creating a healthy business environment aimed at promoting the development of business activities and industries in both countries.

Ignacio Galan, head of the Joint Business Council, indicated on the Spanish side that there are strong relations between the State of Qatar and Spain, which include investments and clean energy, in addition to intertwining in the hospitality and airline industry.

Galan highlights the continued cooperation in the relations between the two countries, pointing out that there is an effort to explore opportunities for investment and cooperation in various fields.

Reyes Maroto, Minister of Trade, Tourism and Industry, confirmed that the economic forum between the two countries and the historic visit of His Highness the Amir to Spain will further deepen the bilateral relations, considering that the relations between the two countries are strong and trade has increased significantly and Qatar is the fifth largest gas producer in the world.

Minister Maroto referred to the Spanish private sector, as it has participated in the construction of stadiums, metro, gas projects and major infrastructure in the areas of water, energy, environment and civil buildings in the State of Qatar.

The Qatar Businessmen’s Association has signed a Memorandum of Understanding with the Spanish Businessmen’s Federation with the aim of improving prospects for strategic cooperation between Qatar and Spain. It aims to promote the development of commercial and industrial activities in the two countries.

“We see the Spanish market as a market full of economic opportunities in various sectors,” said Sheikh Khalid bin Thani Al Thani, vice president of the Qatar Businessmen’s Association, calling on Spanish investors to take advantage of the “promising opportunities and favorable environment offered”. by the Qatari economy, in particular with the presence of free zones in Qatar. And to see more Spanish companies coming to the Qatari market, willing to work together to develop our partnerships and explore joint investment opportunities, whether in Qatar or Spain.

Sheikh Nawaf bin Nasser Al Thani, member of the association’s board of directors, stressed that the trade and investment sector is of great importance in the relations of the two countries, praising the depth and development of Qatari-Spanish relations.

He pointed out that Qatar is the second largest shareholder in the Spanish stock market, as well as the launch of the Joint Qatari-Spanish Business Council as an important step to strengthen trade and investment relations, noting that Qatari investments are in the most important companies. more famous. in Spain such as hotels, real estate, hospitality and others.