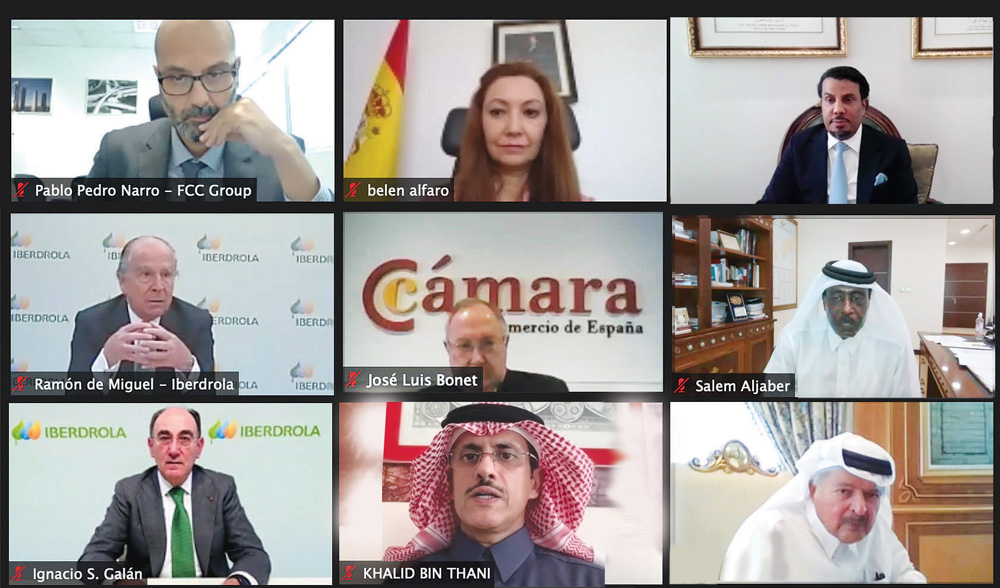 Officials and members of the Qatari-Spain Joint Business Council during a recent virtual webinar.

Total trade volume between Qatar and Spain reached $ 750 million in the first 11 months of 2020 despite the current global economic crisis, while Qatari investment in Spain now stands at € 21 billion in the fields of energy, sport and real estate.
This was announced during a webinar held recently to announce the launch of the Qataro-Spain Joint Business Council.
During the event, the president of the Association of Businessmen of Qatar (QBA) Sheikh Faisal bin Qassim Al Thani and the president of the Confederation of Employers and Industries of Spain (CEOE) Antonio Garamendi, have signed a Memorandum of Understanding (MoU) to establish the new Joint Undertaking Council, in which they were both named Honorary Presidents.
The Joint Qataro-Spain Business Council will also be chaired by its Co-Chairs, the Second Vice-President of QBA and Managing Director of Qatar International Islamic Bank (QIIB), Sheikh Dr. Khalid bin Thani bin Abdullah Al Thani, and his counterpart. , CEO of Spanish electricity company Iberdrola, Ignacio Galán, who were also present at the meeting.
The virtual event also brought together representatives of the Qatari and Spanish governments, including the Director of European Affairs at the Ministry of Foreign Affairs Salem Al Jaber, Secretary of State for Global Spain, Manuel Muñiz, Under Secretary for Commercial Affairs at the Ministry of Commerce and Industry Saleh Al Khulaifi and Secretary of State for Commerce Xiana Mendes.
The Qatari Ambassador to Spain Abdullah bin Ibrahim Al Hamar and the Spanish Ambassador to Qatar Belén Alfaro Hernández were also present at the meeting.
Officials at the meeting highlighted the growing trade relations between the two countries and reaffirmed that Qatar has increased its share to become one of Spain’s major natural gas suppliers.
To date, the Qatar Investment Authority (QIA) is the second largest shareholder of the Spanish Stock Exchange. While around 210 Spanish companies, including 23 wholly owned Spanish companies, operate in the renewable energy and infrastructure sectors in Qatar. More than 3,000 Spaniards also work in various fields in Doha.
According to the Ambassador of Qatar, the volume of Qatari investments in Spain has reached 21 billion euros, and these investments are characterized by their diversity as they include several sectors such as energy, sport and real estate investments.
Al Hamar also pointed out that the Embassy of Qatar in Spain is keen to strengthen economic relations in order to diversify income sources in line with Qatar’s Vision 2030, while supporting Spain by providing more employment opportunities and increasing its foreign investments.
The Ambassador of Spain also referred to the welcoming working environment in Qatar, which has attracted many Spanish companies, and indicated the possibility of benefiting from the expertise of these companies, which have proven their success either in the management or in the implementation of several projects, in particular in the fields of technology, innovation, digitization as well as product quality.
The meeting is part of QBA’s efforts to connect with similar economic institutions around the world to discuss opportunities for economic cooperation during the current global crisis and to consolidate links to identify and benefit from global experiences and discuss proposed solutions to support private sector companies. and institutional.

In his welcoming speech, Sheikh Faisal said, “We are pleased to witness today the launch of the Joint Qataro-Spain Business Council, which includes elite businessmen from Qatar and Spain and opens a new page in the history of economic relations between the two countries and seeks to encourage bilateral trade and investment in various fields, whether in manufacturing or service sectors and will strive to provide a common mechanism for cooperation ”.

He added: “In Qatar, we attach great importance to our economic partners from all over the world and see the Spanish market as a market full of economic opportunities in various sectors. In this context, we invite Spanish investors to take advantage of the promising opportunities and the favorable environment offered by the Qatari economy, in particular with the presence of free zones in Qatar. We want to see more Spanish companies enter the Qatari market and hope to work together to develop our partnerships and discuss joint investment opportunities, whether in Qatar, Spain or any other destination in the world ”.

Garamendi then underlined the need for cooperation between the two parties in various sectors such as industry, infrastructure and sport, especially in the run-up to the 2022 World Cup. He also highlighted the free zones in Qatar , which offer many opportunities for foreign companies, and called on Spanish companies to study the opportunity to be present in Qatari free zones and to benefit from the privileges granted.

Bonet also reiterated that the chamber wished to strengthen trade and economic relations with the State of Qatar and noted that the signing of the MoU was an important step in strengthening bilateral relations, referring to the capacities of Qatar, in particularly in the energy and petrochemical sectors. .

In his welcome address, Al Jaber congratulated the participants on signing the agreement and expressed his best wishes for Qatari-Spanish relations.

Al Khulaifi went on to reiterate that the Spanish Qatari Joint Business Council was the culmination of the historic partnership between Qatar and Spain that had started since the 1970s. He also stressed that bilateral relations between the two countries had grown. remarkably developed in recent years, especially economically. Especially with the volume of trade between the two countries exceeding the period between January and November 2020 to 750 million dollars.

For his part, Muñiz spoke about the important measures the Spanish government is taking to limit the effect of the COVID-19 pandemic, including an attempt to create more jobs as the country has seen a significant increase in the number of unemployed since the coronavirus epidemic. . He added that Spain will receive 140 billion euros from the European Union’s recovery and resilience plan, half of which in support and the other half in loans.

Mendes underlined the strength of Spanish companies and their competitiveness in various sectors, in particular the sectors of digitization, green economy, infrastructure and sports, stressing that these experiences can contribute to the achievement of the economic diversification that l He State of Qatar aspires and strives to achieve, especially in the fields of agriculture, animal husbandry and electronic processing. She added that the Spanish government is ready to support its companies in their cooperation with their counterparts in Qatar, targeting not only the Spanish and Qatari markets, but also other regional and global markets.

As co-chair of the Qatar Spanish Business Council, Sheikh Dr. Khalid congratulated the participants on the launch of the Joint Business Council, hoping that it would be a step forward towards increased economic and trade cooperation and help to strengthen mutual investments between Qatar and Qatar. Spain, as well as to explore the investment opportunities available in both countries.

Sheikh Dr. Khalid said: “The MoU signed by the head of the Qatari Businessmen’s Association today provides for two main areas represented in the expansion of economic, technical and scientific cooperation and the exchange of information between the two countries, which creates a healthy business environment aimed at promoting the development of business and industrial activities in Qatar and Spain. The MoU also included a very important part concerning the strengthening of direct contacts between entrepreneurs of the two countries and the organization of regular board meetings and exchange of visits to present joint business projects, which promotes the investment and supports economic development.

For his part, Galan expressed his joy in forming the Council as an important step to strengthen cooperation and create more partnership opportunities between the two countries. He added that as president of Iberdrola, he witnessed the start of his company’s cooperation since 2005 when a cooperation agreement was signed in the field of energy, and in 2010, in a project on the power grid, in addition to establishing a Doha modernization and innovation center.

The meeting continued as members from the Qatari and Spanish sides presented their companies. The board includes large Spanish companies such as Iberdrola, which works in the energy sector, Grupo Prisa, which works in the communication and press sector, El Corte Ingles which operates in the retail sectors , fashion, food and tourism, Grupo Santander in the banking sector of the sector, Ferrovial in airports and infrastructure, FCC in infrastructure and the environment, the La Liga group which works in sport and football, the Colonial company in the real estate sector, Copasa and Ecisa in infrastructure, Aguas de Valencia in water treatment, as well as Qatar Airways in Spain.

On the Qatari side, the board includes Al Faisal Holding Company headed by Sheikh Faisal bin Qassim Al Thani, which operates in several sectors, the most important of which are hospitality, construction, manufacturing, pharmaceuticals and others. The board also includes the International Islamic Bank of Qatar headed by Sheikh Dr Khalid bin Thani Al Thani; as well as Saud Al Mana as CEO of the Al Mana group, which operates in several sectors such as trade, construction and services; Nabil Abu Issa as CEO of Blue Salon for the retail and luxury sector; Khaled Al Mannai as CEO of Al Mannai Company; Ibrahim Al Jaidah as CEO of Arab Engineering Bureau; Ihsan Al Khaimi as Managing Director of Al Wataniya International Group and Muhammad Althaf as Director of Lulu International Group.