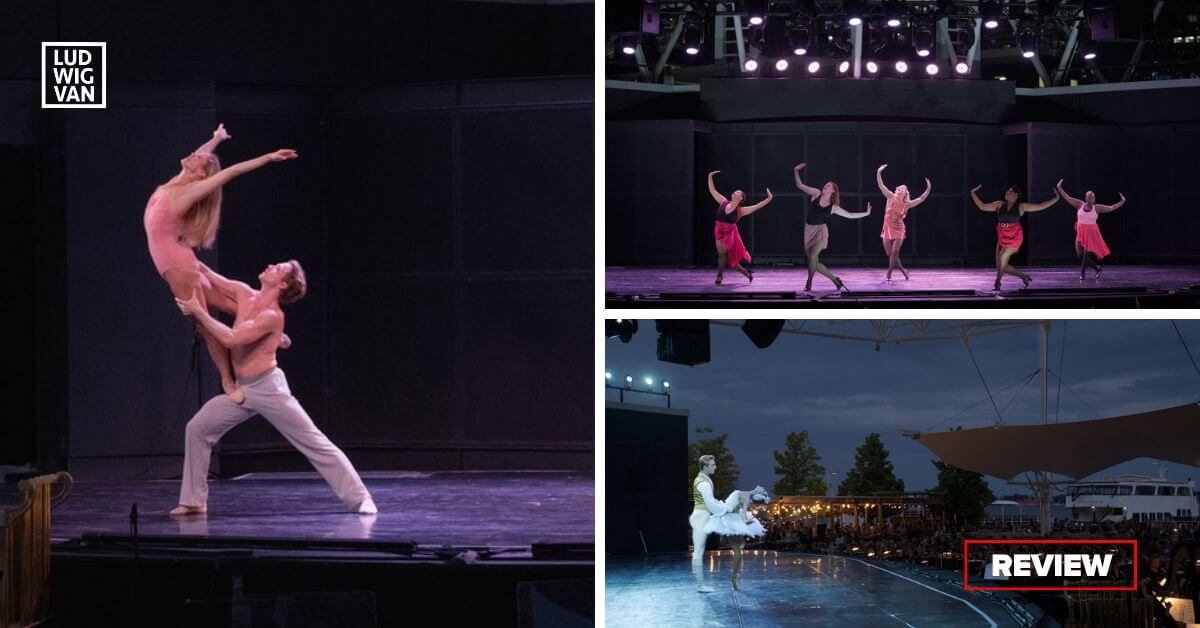 The National Ballet and guest companies shine at Harbourfront

The National Ballet of Canada/Sharing the Stage with Guest Companies, Programs A and B, Concert Stage, Harbourfront Centre, August 16-20. Free; Information here.

Remember the glory days when the National Ballet, Canadian Opera Company and Toronto Symphony Orchestra all had summer performances at Harbourfront? Well, we did a one-third comeback with the ballet company. The National is currently performing five waterfront shows, and it goes without saying that crowds have descended on the concert stage for the performances.

To be perfectly blunt, when Hope Muir was announced as the National’s new artistic director, it was truly a “Hope who?” situation. For most of us, she was an unknown quantity, but slowly we’re starting to get a sense of where she’s headed at the National. These two Harbourfront programs, as well as the recently announced 2022-2023 season, shed light on his choreographic tastes.

For example, Muir is clearly in love with the current generation of acclaimed British contemporary ballet choreographers. Wayne McGregor (Chroma) and Christopher Wheeldon (After the rain) are on the summer programme, with the world premiere of McGregor (Maddaddam) and the Canadian premiere of David Dawson (Anima Animus) planned for the season. It also included a Canadian premiere by the American dean of contemporary ballet, Alonzo King (Collective convention). You really can’t go wrong programming master dancers like these guys, whose works are trumpeted around the world.

Another side of Muir seems to program emerging choreographic talents like Vanesa GR Montoya and Rena Butler. The first, born in Spain, is principal dancer of the Grands Ballets Canadiens. It is represented over the season by the return of Twilight, while New York-based Butler will create new work for the National. On the men’s side, Toronto native Ethan Colangelo is featured in the B program of the summer program with seen from before.

There are the four guest companies that share the stage with the National at Harbourfront. All are based in Toronto, and collectively they represent cultural diversity to the fullest – Black, South Asian and Indigenous, plus a Settler. It is clearly Muir who recognizes the talent of the home team.

In other words, National aficionados can expect something new in a major way, but, by the same token, Muir hasn’t forgotten the old guard like Kenneth MacMillan, George Balanchine, and (he’ll kill me for that) , James Kudelka. It also brings back two acclaimed ballets originally created for the National — Robert Lepage and Guillaume Côté Frame by frameand that of Alexei Ratmansky Romeo and Juliet.

What is missing, of course, are the tutu classics, although I guess we can count Nutcracker in this category. The season and the summer programs are certainly full of contemporary ballet.

With my apologies to the national dancers, I go directly to the invited companies. Suffice it to say, the company danced with confident elegance in McGregor’s Chroma, Swan Lake Act 11 Pas de Deux and Wheeldon’s After the rain, all the works we have seen before. The company is in great shape these days – among the best in the world, in fact.

Program A (August 16, 18, 20) features Natasha Powell’s Holla Jazz, which, as its name suggests, is based on jazz dance. The extract from margarita features five women moving between boob and ass choreography and 1920s Charleston. The piece is seductive, if routine. The full version of margarita is featured at Fall for Dance North, and it will be very interesting to see this simplistic excerpt in the context of the set.

On the other hand, Powell 4 for 5, wonderfully performed by four of the National’s young men – Alexander Skinner, Isaac Wright, Jason Ferro and Scott McKenzie – is absolutely terrific. Apparently, the dancers helped create the choreography, and so we get a delicious combination of showy tricks, like tricky jumps and turns, paired with serious jazz dance moves that involve total physics. With legendary jazz guitarist Chet Atkins playing Paul Desmond’s happy rhythm Take 5, the piece flies away. He is a keeper and belongs in the repertoire.

The other guest on Program A is Kathak dancer/choreographer Tanveer Alam from Montreal. He also made his own musical arrangements for this piece entitled Haazri. Alam is a sensational Kathak dancer, executing quick heel turns, precision arms and hands, and abrupt breaks with consummate grace. The crowd went wild for him, and rightly so. (I should also mention the unusual aspects of his trio of musicians – a tabla player and a sitar settler.)

There is, however, a not-so-small boo to report. My otherwise excellent seat was behind the bassists of the orchestra, so three standing men and their big violins obscured my view. It was like seeing the dance through a latticework. Although I love conductor David Briskin and the National Orchestra, I was happier when they left.

In summary, and judging from the conversations overheard, everyone seemed to enjoy the hour-long program, as did I. Muir clearly wants the National to be part of the Toronto dance community, and so far I’m impressed.

Get daily art news straight to your inbox.

Sign up for the Ludwig van Daily — classical music and opera in five minutes or less HERE.

Paula Citron is a Toronto-based freelance journalist and host who hosts her own website, paulacitron.ca. For more than 25 years, she was senior dance editor for The Globe and Mail, associate editor of Opera Canada magazine, art critic for Classical 96.3 FM and contributor to dance previews for Toronto Life magazine. She has been a guest speaker for various cultural groups and universities, including on the role of the reviewer/editor, and has been a panelist on COC podcasts. Before embarking on a career as a full-time journalist, Ms. Citron was a member of the drama department at the École des arts Claude Watson.