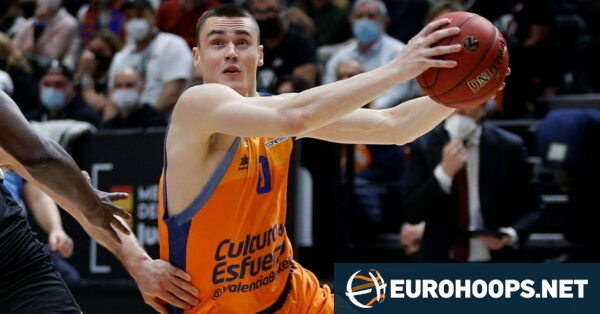 According to the press release: “Valencia Basket has reached an agreement with Unics Kazan for the point guard Neno Dimitrijevic (1.90 m, Skopje (Macedonia del Norte), 23/02/1998, 24 years old) to play on loan in the Russian team during the 2022-23 season.

The North Macedonian playmaker joined the Taronja side in the summer of 2021, having played on loan at Joventut Badalona in his first year with the Taronja side. In the 2021-22 campaign, he played 33 games in the Taronja jersey, averaging 8.4 points, 1.5 rebounds and 3.9 assists and 7.8 PIR in over 18 minutes per game.

Dimitrijevic, 24, will play in the VTB United League and Russian Cup next season. Another player who recently arrived from Valence was Louis Labeyrie. The French big man has signed a one-year deal with UNICS as a free agent.

As for Valencia, an American import born in Texas, Chris Jones should be the main player at the time of the 2022-23 editions of the EuroLeague and the Spanish Liga Endesa. Other newcomers are Kyle Alexander, Jonah Radebaugh and James Webb III alongside head coach Alex Mumbru. Martin Hermannsson, Klemen Prepelic and Sam Van Rossom all signed contract extensions during the offseason.